Morgan Matson’s books are the coin of the realm. (If you read the book, you’ll get it.) 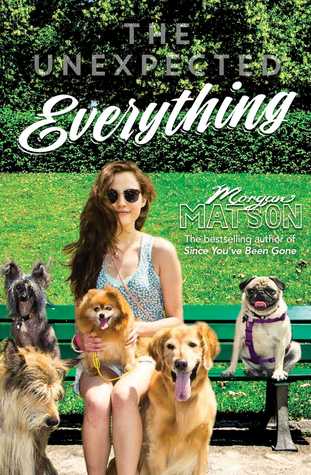 Synopsis:  Andie has a plan. And she always sticks to her plan.

Future? A top-tier medical school.
Dad? Avoid him as much as possible (which isn’t that hard considering he’s a Congressman and he’s never around).
Friends? Palmer, Bri, and Toby—pretty much the most awesome people on the planet, who needs anyone else?
Relationships? No one’s worth more than three weeks.

So it’s no surprise that Andie’s got her summer all planned out too.

Until a political scandal costs Andie her summer pre-med internship, and lands both she and Dad back in the same house together for the first time in years. Suddenly she’s doing things that aren’t Andie at all—working as a dog walker, doing an epic scavenger hunt with her dad, and maybe, just maybe, letting the super cute Clark get closer than she expected. Palmer, Bri, and Toby tell her to embrace all the chaos, but can she really let go of her control?

“If whole galaxies could change, so could I”
― Morgan Matson, The Unexpected Everything

Review: I kind of knew I would enjoy this because Morgan Matson can do no wrong. It’s almost the same pattern, places, characters and relationships. I didn’t expect anything whilst I started The Unexpected Everything only that it would be an enjoyable summer read; and it was. The first few chapters I thought that Andie was just an annoying brat but how wrong I was! She was funny, vulnerable and caring and it was really nice to see her grow and fall in love. Her relationship with her dad moved me; seeing them going through and dealing with their grief was beautiful to read. Clark is the ultimate boyfriend goals: he writes, wears Doctor Who and Star Wars shirts, is dedicated and is good-looking; need I say more? I also liked getting a glimpse of The Since You’ve Been Gone characters, that’s always nice. To be honest, it was very predictable! I swa that she wanted to become a vet, that she would declare her love publicly and most importantly Bri and Wyatt’s relationship. Though I did not expect to have that ending, to see the girl’s dynamic drastically change and that’s what’s great about this book; how realistic it is and how well it portays the reality.Also…DOGS. Last but not least…emojis!! When I first hear that there were some in the book, I wasn’t really happy about it but it really added a twist to the story and made it unique! In a nutshell, it was a great, simple summer read.

“It’s always a risk. Wherever there is great emotion. because there is power in that. And few people handle power well.”
― Morgan Matson, The Unexpected Everything

Hello there! I'm Karla (she/her) and I happily read romances, fantasies or anything that falls into the YA category! I'm particularly fond of the following tropes: enemies-to-lovers, only one bed, fake dating or marriage of convenience. If a book has pining, slow burn, angst or fluff it's a winner in my eyes. I’m also a sucker for any (fairytale) retelling and I love mythological creatures. Bonus points if it's queer! View all posts by Karla

One thought on “The Unexpected Everything By Morgan Matson – Book Review”

Hello there! I'm Karla, a twenty-something French Black woman! When I'm not sleeping, reading or procrastinating, you can find me on my various bookish platforms fangirling over characters, playing guitar, singing musicals or hanging out with my loved ones. Please, reach out! I would love to chat! 🥰

Persephone -  ★★★★★. Queen of the Underworld and Goddess of Spring. Persephone is my favourite goddess because she is full of contradictions – she represents both strength as queen of the underworld and a softness as a floral maiden. If Persephone appears, that means that the book was one of the best books I’ve ever read, that it holds a particular place in my heart and that it is now part of my favourite books ever.

Aphrodite - ★★★★. Goddess of love and beauty. That means that I really liked the book, whether it was the writing style, plot or characters. It means it was an amazing book that I would completely recommend for the beautiful piece of art it is. However the book is not a Persephone because something keeps it from making it one of my favourite book ever.

Apollo – ★★★. God of archery, music and dance, the Sun and light, poetry, and more. I really like Apollo and what he represents. That means that I really enjoyed the book and my experience reading it. That means the book is worthy of Apollo.

Ares  – ★★. God of war. He often represents the physical, violent and untamed aspect of war and is the personification of sheer brutality. Ares will be invoked when a book has made me angry, whether it’s because of its content, writing style or disappointing aspect.

Cronos – ★. God of agriculture, father of the Titans. Cronos is considered a “villain” in Greel mythology and that’s why he will represent one star ratings for me. I don’t think he will come up often because even if I hate the book, I still appreciate the work put behind getting a book written and published and I don’t think it deserves one star.